Can these programs help protect the ground water industry and secure its future? 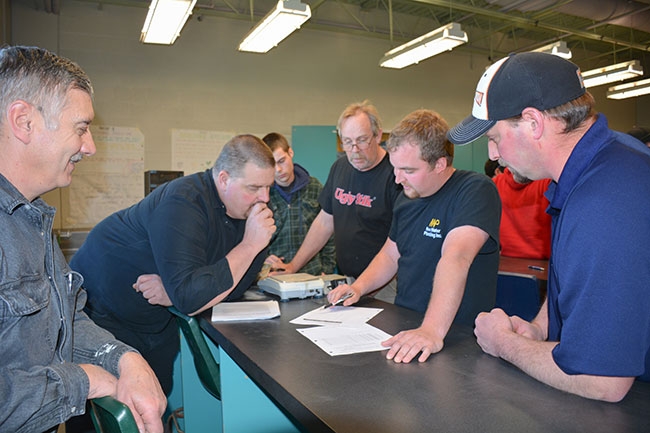 In part 2 of her look at apprenticeship programs, Carolyn Camilleri explores where they exist, where they don’t and the value they hold for the ground water industry.

“Drillers wishing to become certified must accumulate 4,860 hours of drilling experience under the supervision of a certified driller, then pass a certification exam administered by the B.C. Industry Training Authority [ITA],” Tixier says.

ITA calls the process of acquiring on-the-job training and then writing an exam the “Challenge Pathway” to certification.

“The BCGWA assists in this process by vetting applicants wishing to challenge the exam,  for example, contacting supervisors and references to confirm that they have the required hours of relevant work experience,” she says.

“Since I became involved in the vetting process for the ITA in 2015, I have not seen a single apprenticeship application come through the system,” she says. And it may not be the best option for well drillers who want to drill in B.C.

“Due to our mountainous, glacial environment, drilling conditions in B.C. can be quite varied and challenging, requiring different drilling methods and approaches,” Tixier says. “We could certainly use some ‘home-grown’ driller training here in B.C., like they have in Alberta [Red Deer College] and in Ontario [Fleming College].”

Ontario’s Fleming College does not have an official apprenticeship program, but instead offers a certification and licensing program that includes ongoing training. Fleming offers both a full post-secondary diploma program, as well as a 10-day basic program to meet minimum standards. In effect, the programs provide potential graduates with the educational background they need to be licensed under Regulation 903.

Jim Smith, a professor in Fleming’s drilling and blasting program, has seen how education has made for better drillers.

“After Regulation 903, an educational component was introduced for Ontario well technicians for the first time,” Smith says. “Since my involvement in Fleming College’s well technician training programs in 2006, I have personally witnessed an improvement in new technicians having a better understanding of their regulatory requirements, as well as an appreciation for ground water issues pertaining to well construction.”

He attributes that improvement to the requirement to have continual well-technician training and the initial 10-Day Well Constructed Course implemented in Ontario. However, Smith feels there is always room for improvement and says that combining existing programs with an apprenticeship would improve ground water protection and enhance professionalism in the industry.

“The best form of education and learning environment, with the greatest impact, combines theory and experiential learning,” he says. “Apprenticeship programs fulfil both theory and hands-on learning. In order for apprenticeship programs to work, they need to be required – not voluntary – in order to receive your technician’s licence. As well, it requires widespread industry buy-in.”

“We had the outline done and were about to start working on curriculum when the Ministry shelved the whole thing,” Stainton says. “As it turned out, within the government, they had begun the process that came to be the Ontario College of Trades (OCOT).”

The OGWA met with the OCOT about the program, but it never went any further. Moreover, Stainton says the OCOT descriptions for well driller and pump installer are very out of date, despite efforts on the part of the industry to have them changed.

“There should be some kind of apprenticeship program and what is most important – and we had written it into the program we wrote – is that there are checks and balances that prevent bad habits from getting passed on,” Stainton says. “This is one of the issues I have with the current licensing program. Tell me how, in 10 days, can all of the bad habits picked up in 4,000 hours [of work experience] be identified and corrected?”

“Are the best drillers possible being produced by the current system? I think and bet not,” Stainton says. “So do we need a proper apprenticeship program? Definitely.”

Discussion leads to whether a program could or should be national.

Like Tixier in B.C., Smith believes it is best for technicians to understand the legislation in their home province but says it does present a challenge for the apprentices.

“Having different requirements makes it a challenge when it comes to well technicians’ ability to be mobile in their career and move from one province to another with the full understanding of the responsibilities and requirements of that province,” Smith says.

“However, if the legislation and requirements were the same throughout the country, [consistency] would be beneficial and the standard would be nationwide,” he says. “Ground water does not recognize provincial borders. Issues that affect ground water are similar in every province. Therefore, the requirements should be made on a national level.”

A national apprenticeship program would allow well drillers to move around the country, and it would also allow companies to attract employees from different provinces.

Within Ontario, Stainton says, the situation is affected by the provincial government’s unwillingness to promote ground water.

“The provincial policy plan, which governs, among other things, development, says there shall be no one off grid. If you wish to create a development of homes all on septic systems and water wells, good luck!”

Infill is all that is allowed, Stainton says, with the exception of the occasional vacant lots within the designated boundaries of a village or hamlet without municipal water or sewer.

Additionally, it has become increasingly difficult to sever land, so fewer rural lots are available, and with large farms buying up many of the smaller farms, fewer small farms are available that would operate on a well and sewer system.

“People who wish to start farming can barely afford the capital cost let alone someone just wishing to build a house,” he says.

“Like farming, the capital cost of getting into the drilling business is so high that generally one would need to inherit the operation to be able to afford it. A million dollars would not set you up with all of the equipment required to open a well-drilling business; that is a lot of money for a young person of 25 to come up with.”

Additionally, larger drilling companies with newer equipment capable of travelling farther and faster are working in areas where smaller companies worked in the past. Stainton says these two factors – higher costs and fewer opportunities – mean that just as there are fewer new farmers, there are also fewer new drillers.

Desire to do the work is another factor to consider.

“Because let’s face it, well drilling is a heavy job performed in the elements, and a good driller should want to be up to the challenge of bringing water from the ground,” Stainton says. “Not, I suspect, appealing to the average millennial.”

So while Stainton says an apprenticeship program is needed, encouragement for the next generation of well drillers is also needed, and “that encouragement will require access to capital to finance the enterprise.”

Employers can help encourage students by connecting with them.

“Students want to be connected with the industries they will potentially work for in the future,” Smith says. “Anytime employers can spend time – even five minutes – with students is beneficial.”

Opportunities for that connection include participating in the annual job fairs, posting positions through the career services department, teaching one-hour guest lectures and hosting co-op students.

“Employers can take on paid co-op students at various times throughout the two-year program for their summer break,” he says. “Students can – at no expense to the employer – do a job placement for a week, and gain insight into the business and potentially make connections for future employment. Credits are earned through the weeklong job placements.”

Industry support through equipment and supply donations to Fleming’s program has introduced current, relevant technologies and helps students feel well trained and prepared for the industry and the work ahead, Smith adds.

“With these industry interactions, students feel optimistic about employment opportunities, and it drives them to be more engaged in the program in order to graduate and feel success as they seek employment,” he says.

In essence, students do better when they know the industry is interested in them. They may also do better if they understand the art and creativity in the industry.

“My dad always said there were well drillers and there were hole diggers. Anybody can drill a hole and go until they reach water. It takes a well driller, and a good one, to get the sweet water coaxed from Mother Earth at a shallow depth,” Stainton says. “I believe wells are not installed – they are created and a good driller is an artisan, an artist at getting water from Mother Earth.”

Let’s hope, no matter how education is delivered, that artisan awareness continues to be passed along to the new generation of well drillers.

Read Part 1 of this article.